San Diego State entered Saturday’s Mountain West matchup as a 17.5 point favorite over Nevada and the over/under was 39 total points. The Aztecs (7-2, 4-2 MW)  did not cover the spread or win, as they fell 17-13.

For a very slow-paced, low scoring, and defensive game — the ending did not disappoint. The fourth quarter began with a 10-10 tie.

With 12:53 left in the game, SDSU went for and converted a fourth and one from their own 17-yard line, however, a holding penalty called it back and forced them to punt.

Nevada’s first play after the punt was an end around reverse pass that gained 50 yards and set up the Wolfpack inside the SDSU 10. On second and goal, the Aztecs were called for defensive pass interference and it set up a Wolfpack touchdown run, which pushed their lead to seven.

SDSU had nine penalties for 79 yards obviously did not help their case. “Way too many penalties, that’s an undisciplined football team and that’s my fault.” Long said.

A third-quarter passing touchdown by the Wolfpack expanded Nevada’s lead to 10-3, but the Aztecs and Chance Bell responded with a 14 play 71-yard drive. Bell ran in a three-yard touchdown run, which knotted the game at 10 with 1:24 left in the third quarter.

The Aztecs had an incredible scoring opportunity just before the first half concluded. However, senior quarterback Ryan Agnew threw a red zone interception with 1:06 remaining in the half. Before the interception, SDSU had just converted a fourth and one which set them up inside Nevada’s 15-yard line.

The first half was a defensive slug fest, ending in a 3-3 tie. Both teams had trouble finding yards and points throughout the half. In fact, the Wolfpack were held to negative-three rushing yards and did not convert a single third down in the entire first half.

The Aztecs moved up to No. 24 in the Associated Press Top 25, which was released Nov. 3. It’s hard to see them still ranked after this week, but the Aztecs have another game at home next Friday against Fresno State,

“They’re probably pretty miserable and we’re miserable,” Long said. “Next week one of us will feel much better and the other will feel just as bad or worse.” 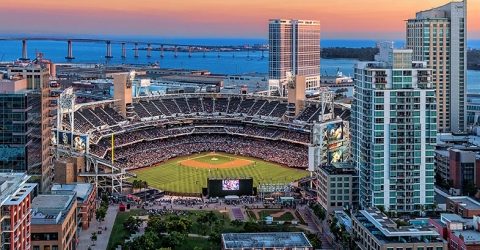 The San Diego State football team is six weeks away from its first game of the 2019 college football season.

Today we are going to take an early preview at the team and its schedule; Last year, the Aztecs were a team that had its sights on a great season until injuries and counteroffensives came. Despite these setbacks, the Aztecs were able to win seven games and get to their ninth consecutive bowl game. Now, they have gone to a spread offense, which means more passing, but the same philosophy of running the ball will continue. SDSU football head coach Rocky Long said the spread offense will help the offensive line find their blocking man faster.

The Scarlet and Black have seniors at quarterback (Ryan Agnew), running back (Juwan Washington) and fullback (Isaac Lessard) returning. Washington, who was injured last year, looks to have senior season like Rashaad Penny and Donnell Pumphrey and rush for 2,000 yards. When he got hurt, he led the country in rushing yards. Behind him, at the running back position the Aztecs have a group including: junior Chase Jasmin, and sophomores Jordan Byrd and Chance Bell to get yards. On the offensive line, senior Daishawn Dixon leads the way with juniors Jacob Capra (transfer from Oregon) and Zachary Thomas. Senior Parker Houston looks to replicate what Kahale Warring has done in years past at the tight end position. Also on offense, they have junior Tim Wilson Jr. to lead the way, especially for an offense that is going to the spread.

On defense, they are led by lineman Myles Cheatum and linebacker Kyahva Tezino, who decided to return for his senior and is on the Chuck Bednarik Award watch list for the best college defense player. In addition to Tezino, Long will have sophomore cornerback Darren Hall, who recorded 45 tackles in 2018 as a freshman. Also on defense, they have junior safety Tariq Thompson, who plays safety and was a freshman All-American by FWAA and USA Today back in 2017.

The Scarlet and Black lose one of the best kickers in the country in John Baron II, but redshirt freshman Matt Araiza steps in looking to repeat what Baron has done as an Aztec. Punter Brandon Heicklen returns for his senior season and Juwan Washington continues as the kick returner.

If you’re wondering when the Aztecs are going to play, we’ve got you covered. Here’s a schedule for the San Diego State Aztecs 2019 Football Season:

Looking at the Aztecs’ 11 games, there is no reason why they can’t make another bowl appearance. We will have to see how the spread offense does against the defenses from the opponents they face.