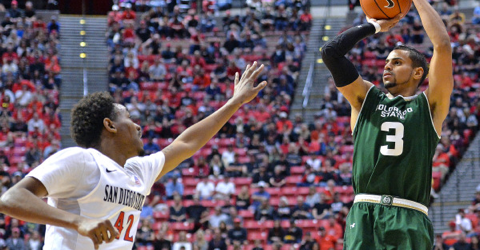 San Diego State men’s basketball fell just short of the mark, as Colorado State University battled back from a 13-point deficit in the second half to beat the Aztecs, 78-77.

CSU senior guard Gian Clavell was the man responsible for the Rams’ game-winning shot, putting the game on ice with a layup with just 3.8 seconds left in the contest.

“Once I saw [SDSU junior forward Malik] Pope kind of reach in, I pulled it up and it went off the backboard,” Clavell said. “Thankfully it went in.”

The Aztecs’ student section wasn’t thankful of Clavell, as the Scarlet and Black faithful dialed their chanting efforts towards him all night. Unfortunately for The Show, their chants only seemed to fuel Clavell’s scoring frenzy.

Clavell’s layup pushed his point total to a career-high 37 points on 14-23 shooting from the floor.

The Aztecs, however, dominated the first half of Saturday’s affair with momentous dunks from both Pope and senior center Valentine Izundu. The two’s efforts helped SDSU build a 10-point lead at halftime.

The Rams, of course, bucked back.

A barrage of three-pointers fueled CSU’s comeback efforts, as the team shot an outstanding 87.5 percent (7-8) from downtown in the second half. With that, the Rams finished the day shooting 55.6 percent (10-18) from behind the arc, doubling the Aztecs’ measly 27.3 percent three-point percentage.

Pope did his best to keep SDSU’s offense afloat, as he led the team in scoring with 19 points. He also picked up a team-high seven rebounds, filling the void of injured sophomore forward Zylan Cheathum.

“Missing Zylan is a big piece, so of course I’ll have to step my game up on rebounding and all the ways that he helps this team,” Pope said. “But we all did that. All five of us. Everyone else on the court, it wasn’t just me. We just had to pick up the slack [in the things] he was really good at. [But we’re] just waiting. Just waiting, hoping he gets back soon.”

Cheathum was a late scratch from the lineup due to a “stress reaction” in his foot. His status will remain day to day.

SDSU’s second half collapse against CSU shares similarities to the team’s 60-57 loss to Air Force on Tuesday. Both games featured an Aztec team incapable of maintaining a lead in the closing minutes.

Though SDSU was able to crash the offensive boards late in the contest, they simply couldn’t push their shots through the bottom of the net in the clutch moments of the game.

Additionally, the Aztecs’ offense left a lot of points off the board because of missed free throws, as the team shot just 67.8 percent (19-28) from the line. Pope went as far as to completely miss the basket on one of the team’s final free throws, one of many SDSU miscues late in the game.

Despite the mistakes, SDSU head coach Steve Fisher believes his team did everything necessary to win the game.

“When you have five turn overs, score 77 points, get to the free throw line 28 times and they are 14, you should win the game,” Fisher said. “And we didn’t.”

The loss adds to the Aztecs’ current downward spiral, as they have now fallen to 11-9 overall and 3-5 in conference play.

Fisher will look to right the ship before the Aztecs’ next home affair against the University of Wyoming on Tuesday, Jan. 31.