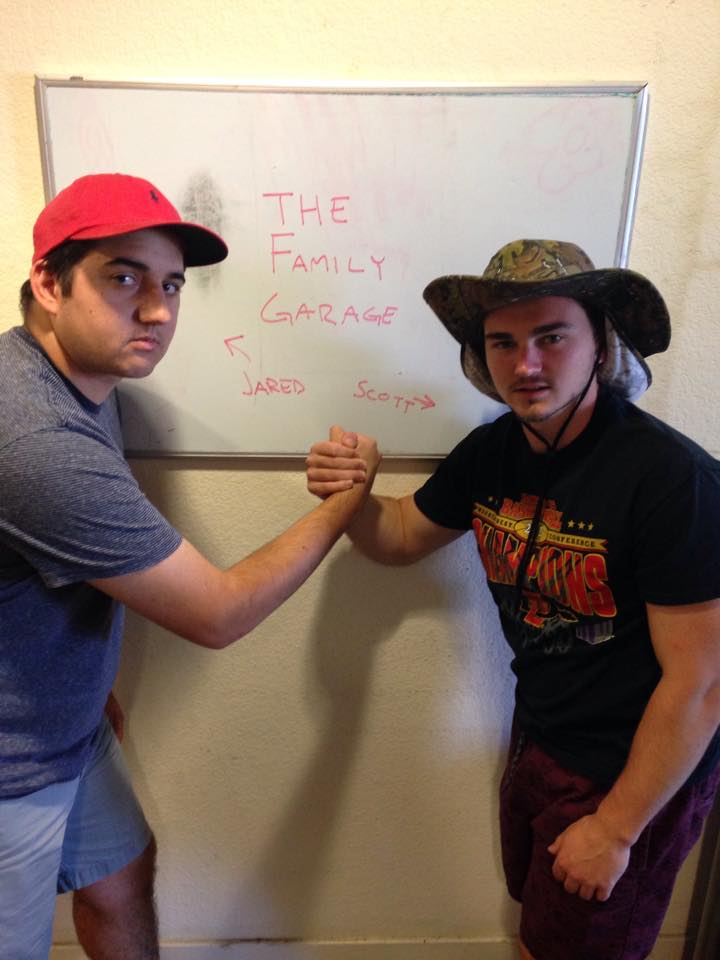 Just yesterday, I met up with Scott Granlund and Jared Kleber at their apartment to record my final interview of the semester. Scott is a coworker of mine at KPBS and mentioned to me early this year that he was starting a radio show, I’m glad I was able to squeeze he and his cohost on at the very end. I hope you can tell as you read but this was a very fun interview, one of the best I’ve had in my opinion. Scott and Jared have great chemistry and made it a fun conversation. Scott talks almost as fast as he thinks while Jared’s more measured pace somehow fit neatly together. It made transcription pretty hard but I really wanted to capture the spirit of the conversation for my last interview.

A reminder one last time: I try to transcribe the conversation as it happened, to capture the cadence and structure of our speech I put grammar in a secondary role. So without further ado, here is the final interview of the semester:

Cameron Satterlee: Alright, I am with Scott and Jared, welcome guys, thank you for being on.

CS: So, what is your radio spot?

SG: Our show is called the Family Garage, we play garage rock, psychedelia, proto-punk, new stuff, old stuff, the time is ten pm on Sundays and it’s an hour long show. And we talk about random stuff too.

CS: Alright. You’re getting ahead of me, man.

CS: No it’s cool. It’s a good answer. So how long have you guys been with KCR?

JK: This will be the end of our first semester.

SG: Yeah this is the first semester we’ve had this show. And we weren’t there before.

CS: How did you guys partner up?

SG: Well we live together, and we’d been talking about doing a show together for I want to say a year, we wanted to do it sophomore year and then we never really got our act together. And then finally we were just like (claps hands) apply online let’s just do the thing, and we kinda sat there like “what should we play?” It was literally one night, cause we knew we wanted to do a show together just to do something different and do something new. We were literally just sitting on the couch saying “what should we play?” And we just kinda workshopped it then and thought of this idea of playing garage rock; kinda a blanket genre where we could do a little bit of everything. And we thought we’d talk about stuff in between songs and we tend to talk about a lot of weird stuff.

CS: Alright well that sounds pretty interesting. You said you kinda just pulled out garage rock sorta randomly, how come you decided on that specifically?

JK: I think we were originally—I think we had talked about it—we were at a record store and we were listening to garage rock and I was like “we should just do that” because it’s kinda a blanket genre. A lot of things can classify themselves as garage rock. You can play stuff from the 60’s and onward and it wouldn’t really matter if it’s not particularly garage, it could be a little punk, it could be a little psychedelic. It’s kinda a nice blanket genre for rock music which I don’t think gets a lot of play anymore, so it’s pretty nice.

SG: Yeah that’s right. I think the record store thing especially. What we were just hearing while we were in Off the Record, in our apartment, at Thrift Trader and stuff just is nice, “I wanna do that.”

JK: Yeah we wanted to play music that you don’t really hear anymore.

CS: Well maybe it’s fitting that you guys are on Sunday with the alumni shows cause they play a lot of stuff kinda like that too.

SG: Keeps with the theme I guess.

CS: Uh huh. So I guess you sorta answered this already, but I wanna know a bit more in depth I suppose what made you want to do the radio and be rock DJ’s?

JK: Well we are both film students and I think we understand media quite a bit.

SG: Yeah I would agree. I think that we were just kinda interesting in another form of broadcast really. Especially with the kind of music that we ended up playing, it worked out really nicely. It’s an old kind of medium that we can showcase this music that is old and classic too. Just the idea of the radio show, that there’s two people who are controlling what you’re listening to and you hear their comments about it and what their takes on the world are. In that respect, for the podcasts especially, you’re just hearing what people think about stuff. We just thought why not put our opinions out there.

CS: Cool, yeah that’s great answers you guys. So you guys mentioned it earlier but you play this garage rock because it allows you to play different kinds of music from a long period of time. Is there anything recent that you play?

SG: FIDLAR, once. So it’s just smaller, more punk-y bands. We played a bunch of Alabama Shakes a lot on our show too cause they have a new album out. So I mean, it’s more of that blanket theme where “yeah, this is some kind of rock, alternative thing” so let’s play it. So it’s really stuff we like too.

JK: It’s all stuff that’s really small. You wouldn’t hear most of the bands we named on the radio. Those people survive online or on college radio.

CS: You guys are doing your part then!

CS: (laughs) Yeah broadcast it out. So you guys are roommates and have known each other for a while now, would you say you have good chemistry on the air?

SG: We met in orientation actually, before college actually started. He was one of the first people I met and we talked for a while, we made our schedules right next to each other, and we ended up having the exact same schedule freshman year. We had every class together and we ended up living in the same dorm hall three door down from each other. So we’ve been friends for a long time now, and then we moved here to our current apartment and we’ve been living here for two years, and we’re living together next year too. So there’s good chemistry. A little good back and forth every once in a while, we sync up and say the same word at the same time and it’s kinda funny. I dunno, it works, works for us.

CS: Hey cool, I know exactly what you mean cause I met my cohost at orientation too.

CS: Yeah, fun story. So, last question, I always like to ask this, how would your perfect show go? Just an ideal, perfect hour. How would that be?

SG: Well we’ll do a music news, coming down the pipe section, and then we’ll do a random this is what’s going on in our lives talk, and then we’ll do a random here’s a thing that’s happening in the world usually. So the craziest thing in the world, if there’s a lot of great music news to talk about, some funny weird stuff happened, and some weird stuff that happened in our lives that are funny to talk about and then all that. And then every other week we actually have “bi-weekly double shot,” we made a sound bite for it, we play two of the same artist back to back. So I guess if we have a really good playlist for the night and just things that flow well and then it could also tie in well with some of the music news. I dunno, every once in a while we hit our stride and we’re kinda funny at the same time we hit it. We’ve had some good shows.

JK: I think an ideal show would also have guests, we’ve had guests on to also talk about sports for ten minutes.

SG: For no reason.

JK: We don’t even do a hip hop show but we do hip hop news. And I feel like our listeners probably don’t like that but there’s not a lot of garage rock news. There’s more hip hop news.

SG: We actually addressed that on our first show. I’m sorry, this answer has gone kinda long.

SG: But we kinda addressed that on our first show. We said we can talk about garage rock news but all it would be like would be “these guys got a new EP out, they’re touring 16 places you’ve never heard of, it’ll cost no money and ten people will go to the show. Yeah they’re not gonna do anything too weird.” Meanwhile literally we had three shows in a row where we had news about the rap group Migos because they kept getting into a whole lot of trouble. That was like our Migos news segment.

SG: Either stabbing nine people at an Albany concert.

JK: They got arrested for guns.

JK: They’re crazy so every week we check up on Migos basically to see what they’re up to because they’re insane.

SG: So it’s more fun to talk about them and then we’ve got some funny things that happened last minute like Mark’s mom’s show was funny.

JK: Yeah we found that one of the cohosts of the show the hour before us, his mom always listens.

JK: And she was picking him up one time and she was like “I like your show. Much better music than my son plays.” And we were like “shouts out to Mark’s mom.”

SG: We were just talking about her on air, it was really cool. Even if it’s ten people that listen, it’s great to hear that we have the one Mark’s mom. Mark’s mom likes our show!

SG: That wasn’t really an answer to your question much, I guess it kinda was.

JK: Our ideal show would have five minutes devoted to Mark’s mom.

JK: A guest of some kind.

SG: The Migos literally just blew up the state of Idaho.

SG: I dunno how much we could squeeze in. I guess the funny part of our show is that what we talk about never matches the music.

SG: We’ll talk about the music but our conversation has nothing to do with it.

JK: We’ll be like “hey did you hear about this thing?”

SG: “Anyway, FIDLAR coming up next!” Yeah. So there you go.

SG: You can take whatever you want of that, please don’t feel like you don’t have to translate all of that.

CS: No that’s cool. That was actually really awesome. Thanks guys.

So there you have it, Scott Granlund and Jared Kleber. Again, I thought it was a great interview. Scott and Jared are clearly taking full advantage of what KCR has to offer as a way to express a unique vision on the radio. You only have one more opportunity to tune into their show this semester: Sunday at 10 pm. But I’m betting they’ll make a triumphant return to the online airwaves next semester.

This was not only my final interview of the semester but I believe it will also be my final interview for the Sounds of State. I may return next semester to the KCR blog, but I am retiring from this project. Thank you all for reading, it has been a pleasure.