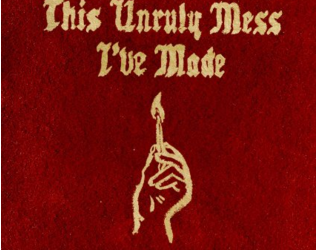 The 13-track album is chocked full of guest artists singing and rapping alongside Macklemore and Lewis. 12 of the 13 songs feature guests such as Chance the Rapper, Ed Sheeran and even actor Idris Elba.

The song Dance Off sees Idris Elba challenging Macklemore to a dance off. The song, reminiscent of And We Danced, is not quite as catchy, but pretty entertaining. Another of the ‘less deep’ songs on the album, Brad Pitt’s Cousin, is sure to bring a smile to listeners’ faces with its lyrics about his famous cat and penchant for herbal tea.

Kevin, a darker one on the track list, is an album highlight. It laments a friend lost to drug addiction and criticizes our society of prescription drugs and pill popping. St. Ides, the only solo track of the album, is another highlight. It is a reflection back on Macklemore’s early years struggling with alcoholism.

These dark songs are contrasted by the more hopeful tone of songs like Growing Up.  Written for his yet unborn child, Macklemore raps out his fears and dreams about fatherhood. He gives his baby his own version of fatherly advice.  His advice includes words of wisdom such as fall in love, cheat in calculus, wear a helmet, look before jaywalking and be selfless. Featuring Ed Sheeran for the chorus, the song is a soft and sweet love song dedicated to his baby.

One of the most notable and most sobering tracks on the album is White Privilege. The song follows up where the original left off. It reveals Macklemore’s inner conflict about where he belongs in the hip hop world and how to show his support for a cause that is not technically his. He recognizes his appropriation of another culture’s music and struggles with the fact that his race has contributed to his success.

In verse one of the song he raps,

“I want to take a stance cause we are not free.
And then I thought about it, we are not ‘we.’
Am I in the outside looking in, or am I in the inside looking out?
Is it my place to give my two cents?
Or should I stand on the side and shut my mouth?”

The nearly nine minute song is a battle of conscious about who and what he and his music are and what his part in the Black Lives Matter movement should be.  He raps about how he wants his music to be authentic and to support the culture that gave him “a voice to begin with.”

After more than three years of waiting, the new music does not disappoint. It serves as  a worthy follow-up to the duo’s Grammy-winning first album.

This Unruly Mess I’ve Made is a reflection of the ups and downs, the struggles and the successes, that Macklemore has experienced since his rise to fame. It may be a bit chaotic, but the “unruly mess” is what makes Macklemore, Lewis and their music feel sincere and authentic.