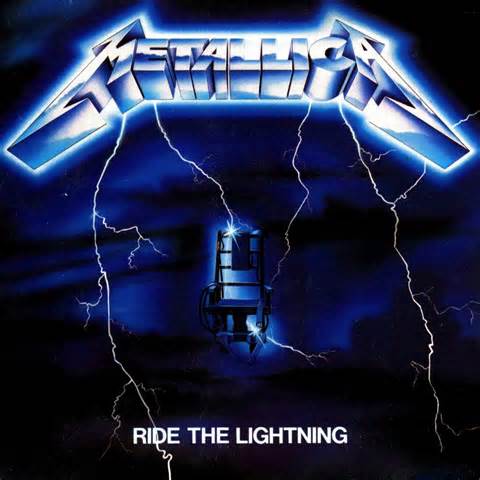 For the first time in this series we are stepping out of the 70’s and profiling an album from a different decade, hopefully a trend that I can keep up. The album in question is Metallica’s sophomore release Ride the Lightning. Our subject last week was punk rock so this time we are going metal, and it really is one of the best metal albums of all time. Written and released in 1984, Ride the Lightning was the template for the trilogy of releases (itself, Master of Puppets, and …and Justice For All) that would go down as some of the genre’s finest.

Paramount to the album’s success is that Ride the Lightning is one of he best sounding metal albums ever. The mix employed by producer Flemming Rasmussen is perfect. The guitars, bass, and drums all have a layered depth to the sound that few bands are privileged enough to achieve on their second album. Despite being recorded in only 3 weeks, the album sounds miles better than some of Metallica’s later efforts (I’m looking at you Justice and St. Anger).

Fight Fire With Fire is the lead track off the album and it begins with a bang. Well it actually begins with a melodic acoustic intro, which must have thrown off many Metallica fans off when they first listened to it. The song then bursts forth with one of the most furious riffs ever conceived by singer/rhythm guitarist James Hetfield. Drummer Lars Ulrich’s trademark double bass never sounded fiercer. The song concerns itself with nuclear armageddon and the eye for an eye brinksmanship games that countries play with each other that could potentially lead to a global catastrophe. This is one of the fastest songs Metallica ever wrote, and that is really saying something. Thrash metal at its finest.

The title track is the second song on the album. Ride the Lightning is a heavy but fast paced thrill ride. The song is about a wrongly convicted man being sent to the electric chair, the sort of wrongful death narrative that many great metal bands write every once in a while; Hallowed be Thy Name for example. What makes Ride the Lightning one of my personal favorite Metallica songs is lead guitarist Kirk Hammett’s extended and furious guitar solo. Over a minute and a half in length, the solo twists and turns in an exhilarating fury that represents the rush of electricity that the song threatens the narrator with. The song in one of two on the album that give writing credits to former band mate Dave Mustaine, who was kicked out of the band before the recording of Metallica’s debut album.

A bell ringing harkens the the third track on the album: For Whom the Bell Tolls. It’s a plodding and iconic piece of metal glory. The extended instrumental introduction has a progressive flavor, with the whole band weaving in an out in before the vocals come in over two minutes into the song. Inspired by the Earnest Hemingway poem, For Whom the Bells Tolls is about a group of soldiers forsaken on the battlefield by their leaders and left to die. The song features prominently the contributions of bassist Cliff Burton and is considered one of his great recordings.

The fourth song on the album is Fade to Black, and it is one of the most important songs Metallica ever wrote. The first real thrash metal ballad, the song comes from the perspective of a tortured individual contemplating suicide. In the years that followed, the band has received hundreds of letters from fans who could relate to the song and were able to find solace in it. The song begins with an acoustic guitar which plays throughout the first half of the song, a real oddity in the Metallica catalog. James Hetfield’s singing is for the first time not all anger and screaming, a development that would generate Metallica’s other famous ballads like Sanitarium and One. This would also allow Metallica to write other more articulate songs when they began to experiment more around The Black Album years and beyond. Kirk Hammett’s legendary guitar solo closes out the song. The absolute best work of his storied career, Hammett’s emotionally charged shredding brings the song to its climactic conclusion.

Trapped Under Ice is a return to more traditional thrash to follow up the previous two songs. The track is about a man trapped in a cryogenic state and trying to break free from it. The song is a textbook example of Lars Ulrich’s double bass pounding. For a long time Metallica shied away from playing this song, but they dust it off occasionally for live performances.

One song Metallica never played live was Escape, the sixth track on the record. Despite the fact that most fans like the song, the band apparently has a low opinion of the piece. It is a bit heavier and more commercial sounding and the band was embarrassed about that, despite the fact that they would come to write many more songs in that manner for their fifth album Metallica. It would be 28 years before the band would play it, and then only once when they played the whole Ride the Lightning album.

Creeping Death is the complete opposite, this song is Metallica’s second most played of all time behind Master of Puppets. It is also the first song where Kirk Hammet gets a vocal writing credit, for the “die by my hand” vocal section which was taken off an unreleased track from his previous band Exodus. Fittingly, the song is about the plague of the firstborn from the Book of Exodus, manifesting itself as the titular ‘creeping death.’ After the guitar solo the song swings into the aforementioned “die by my hand” breakdown, a favorite of moshing crowds for almost 30 years now. Creeping Death is one of Metallica’s most popular songs and is a rush from beginning to end, definitely the most refined thrash metal the band wrote in this early era before Master of Puppets.

Closing out the album is the epic, near-nine minute instrumental The Call of Ktulu. Another song inspired by an early 20th century author, this time H.P. Lovecraft and his horror novel The Shadow Over Innsmouth with the short story The Call of Cthulhu. The song has a sinister feeling of dread and panic in the spirit of the beast Cthulhu. Lovecraft’s work would also be referenced in Metallica songs The Thing That Should Not Be and All Nightmare Long. Like all of Metallica’s instrumentals written before his death, bassist Cliff Burton is the center of attention in the song. His short and fast bass solos weave in and out of Hetfield and Hammet’s dual guitar play. The song features an extended closing section with plenty of false endings that finishes the album off with a bang, just like it started.

This year is the 30th birthday of Ride the Lightning and it has aged remarkably well. It consistently ranks in the top 5-10 metal albums on many ‘all-time’ lists. This was the album Metallica need to make as they transitioned from an up and coming thrash band to the kings of the genre when they released Master of Puppets two years later. The album is pure thrash but with enough refined and experimentation to separate it from the rest of the bands at the time. What was used here in this album were the building blocks that would lead to Metallica becoming the most successful metal act of all time.