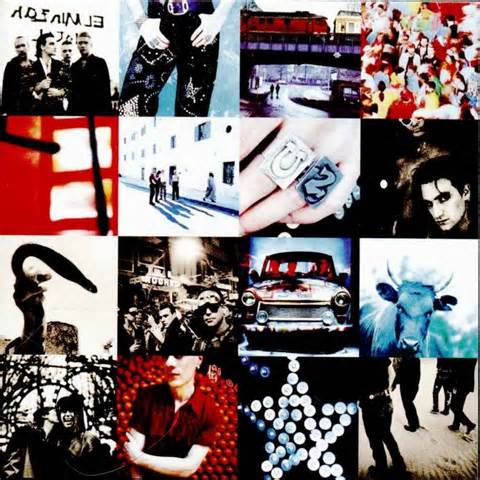 Welcome back from break everybody, this week the album I’ll profile is U2’s 1991 release Achtung Baby. A huge turning point in the band’s career, the album was vastly different, a complete reinvention, from their previous record Rattle and Hum. Achtung Baby drew inspiration from the industrial music and electronic dance music and projected the band into a much more alternative sphere than they had previously occupied. It was also the band’s move away from the very serious ‘going-to-save-the-world-with-rock-and-roll’ image that was fairly or unfairly bestowed upon them into a much more flippant and self-parodying band. This is also the first album in this series that comes from the 1990’s, U2 is also the first Irish band whose record I’m profiling, yay diversification! Let’s jump right in.

The band’s change in style is immediately apparent within the first few seconds of the first track, Zoo Station. The beat is very industrial and features much more heavily distorted guitar than U2 had been exploring. The song moves into a very melodic verse-chorus-verse that has singer Bono dueting with himself on multiple vocal tracks (even if he is somewhat unintelligible). Zoo Station song was written as a spin off from another song called Lady With the Spinning Head and some similarities between the two can be heard. The song takes inspiration from an urban legend of the zoo animals running loose around the streets of Berlin after an Allied bombing rain in World War II. On a conceptual level, the band was drawing influence from European music and culture instead of American music and culture like they had done since The Joshua Tree. This move coincided with a revival in pan-European sentiment due to the fall of Communism.

The third track is one of U2’s most famous songs, the hit single One. The band was having a huge amount of trouble recording the Achtung Baby album and was coming close to breaking up due to the strain. Bono and The Edge were those advocating for a changing sound but bassist Adam Clayton and drummer Larry Mullen Jr. wanted U2 to retain their established sound. Each member credits the recording of this song and the spontaneous nature it was created with keeping the band together. The song’s lyrics deal with relationships big and small, from intimate relationships between people to the healing of nations torn apart, and how everyone has only one life to live and they should try harder to come together.

The fourth song is another fan favorite, the mid-tempo Until the End of the World. The song is a retelling of the moments between Jesus Christ and the apostle Judas and his betrayal. The song was primarily written by Bono, as he composed the guitar riff and the lyrics. Adam Clayton also has a great turn on bass in this song, with wild and rollicking lines than surge through the song.

The next record is the uplifting yet self-conscious Who’s Going to Ride Your Wild Horses. The song could have been a huge concert his but it proved very difficult for the band to mimic the atmosphere the song enjoys in its studio recording. The band members themselves felt the song to be incomplete along with Steve Lillywhite, who helped to produce the song.

The sixth track is So Cruel, a slow and plodding song that blends genre in its five plus minutes on the record. The song owes its sound to a magnificent studio mixing job that transformed the song from its original acoustic state into a very sleek and polished beast. So Cruel drew inspiration from the separation that The Edge was undergoing with his wife during the recording of the album. Larry Mullen Jr’s percussion track on the song plays a huge role in the song as it builds up from a repeating piano riff to a murky emotional mess.

At the midpoint of the album we reach the unqualified rock masterpiece of the album, the ordinary yet so completely unordinary The Fly. If any song represented U2’s move into ‘alternate’ rock from the roots rock sound they utilized in their previous albums it was this once. The Fly showcases every member of the band at peak form, especially The Edge’s guitar-play, whose crunching distortion is the trademark for the song.

From The Fly we move on to the playful and lithe Mysterious Ways. The song has a very fun and danceable beat and is as straight up of a love song as you can find on this album, or much of anything the band wrote until the new millennium. The song was released as the second single off the album (after The Fly) and enjoyed considerable praise from both the public and critics.

The ninth song on the album is Tryin’ to Throw Your Arms Around the World. The song is another more straightforward piece that sees the band utilizing their new sound to build a fun and appealing record out of the successful dense and modern mix they developed.

The song Lady With the Spinning Head evolved three of the band’s best songs on Achtung Baby, including Zoo Station and The Fly. Ultra Violet (Light My Way) is the final one of this trio. The song has many pop merits, and became the band’s closing song for years. It sounds a bit more like their earlier records than most other songs, but the lyrics are much less serious than the heart-on-your-sleeve type the band wrote prior to this album. Maybe the most accessible song on the album, it is also one of the real highlights.

From the emotionally uplifting Ultra Violet we move to the paranoid Acrobat. The song is a bit bitterer than much of the optimistic work of the pro-Europe songs that the band was writing. Acrobat is also interesting for the band as is performed in 6/8 time which U2 and most rock bands rarely venture into.

The final song on the album is the brooding and simmering Love Is Blindness. The song is very similar to So Cruel in its structure and inspiration, but much angrier. A very slow piece that slowly surges into a subtle yet swirling mass of chaos by the end. It was originally written for the Rattle and Hum album but shelved until Achtung Baby. It closes what by comparison to U2’s previous work is a raw yet insanely polished set of alien sounding music.

Ambiguity and polarity are the key words for this album. As I mentioned with Love Is Blindness, the songs on this record have both very raw elements drawn from industrial rock but at the same time a clean and polished sound when they need to be. The tracks comprising the album are all about uncertainty, unresponsiveness, a yearning for connectivity and unity. The album reflects the feelings of many people at the dawn of the nineties. Europe was uncertain of its new future with Communism gone and many did not know where to go from there. U2’s album was both mirrored this uncertainty but offered a timid hope for better days for those who would put their toes in the water.