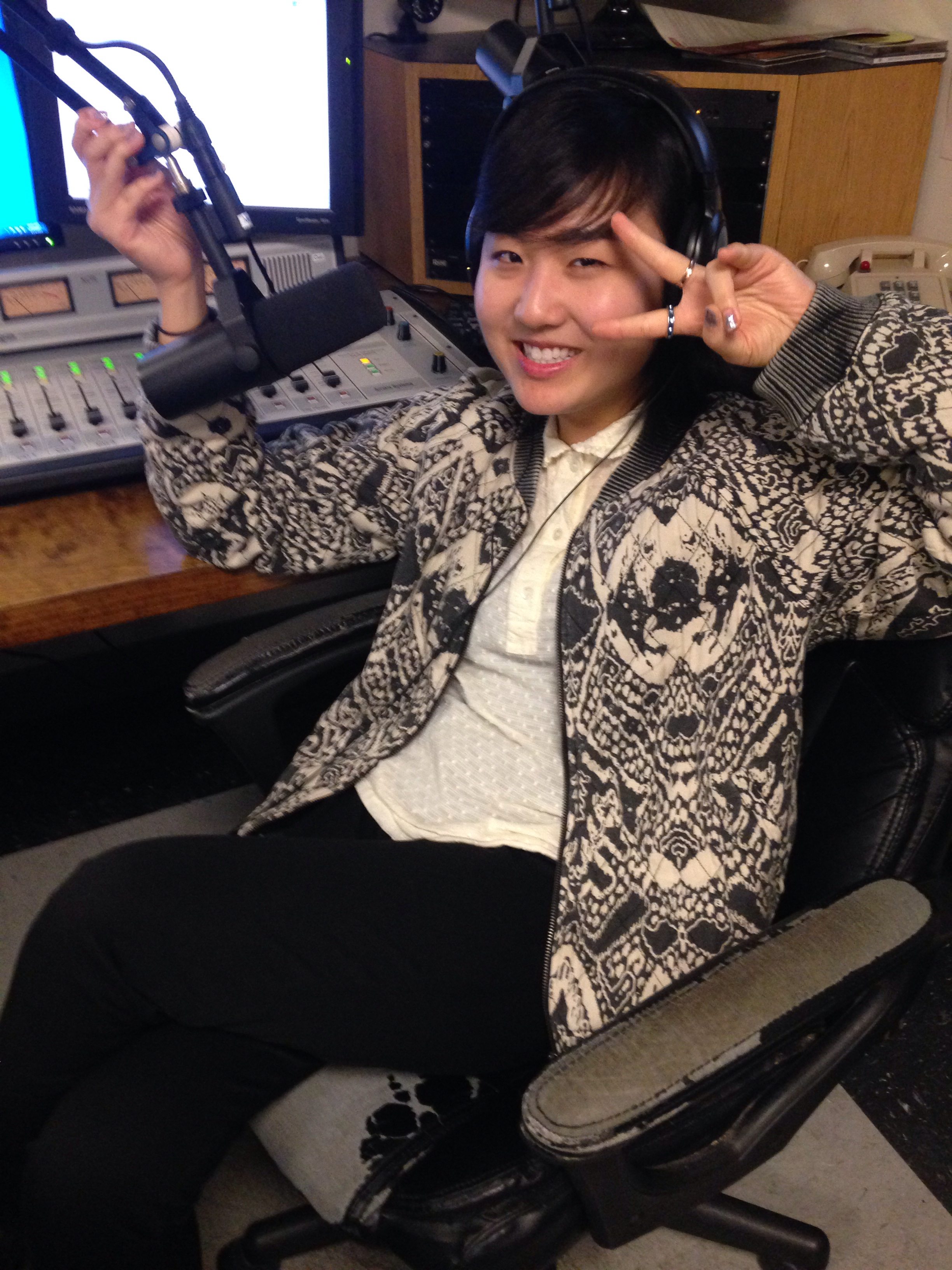 On Wednesday I caught the trolley, a bit delirious from typing essays the night before, but eager to see my latest DJ to interview. Jini Shim is KCR’s resident K-pop DJ, that’s Korean pop music, to the uninitiated. We decided to schedule the interview about half an hour before her radio slot at 11 am. It gave us plenty of time to chat and give you all a great interview. Check it out.

Cameron Satterlee: Alright, I am sitting down in the KCR studio with Jini. And thank you for joining me with this interview.

Jini Shim: Yeah, thanks Cameron for doing this.

CS: Hey, no problem. It’s what I do now. So you’ve been with KCR for how long exactly?

JS: Well this is my first semester, yes.

CS: So what is your radio slot?

JS: It’s on Wednesdays from eleven to twelve pm and I do an hour of Korean music—K-pop songs.

CS: Alright well that was my question so that works. So how come you play K-pop?

JS: I am Korean. I have a lot of interest in the Korean culture so I guess that makes me listen to Korean music and keep up with it, even if I don’t like it sometimes. So then I just want to promote it to other people in case they are interested and I think K-pop is rather more known now compared to maybe five years ago. So I also play for those who like K-pop out there.

CS: Yeah that’s awesome. Yeah it’s definitely gotten a lot more exposure in the last few years. I mean you said about five years ago, yeah five years ago I probably never heard about it, but now you know I know about it and there are a lot of people who are aware of it so that’s cool that you’re promoting it as part of your heritage. That’s awesome actually.

CS: K-pop, is it like other genres of music? I mean, it’s pop music so you’ve said there’s some good and some bad, is it similar to other stuff we have circulating around the globe?

JS: Right. So a lot of the mainstream K-pop that you hear, if you were to maybe Google K-pop and the few videos or music that would come up, if you listen to it you would probably think it’s really similar to Euro-pop. A lot of people also refer to Euro-pop when they compare it. So yeah I could compare it to that, but then some people, they say whatever song—music that comes from Korea—would be considered K-pop. But those that know more about what K-pop is like would disagree, because there are fans of Korean hip hop that would say “no, do not associate Korean hip hop with K-pop,” and there’s all the different genre lovers and they wanna claim their type of music.

CS: Yeah, I mean that would be saying that there’s just an American music or a French music style.

CS: I know what you’re sayin’. Yeah I mean there’s always a rock band out there that doesn’t want to be labeled pop music.

CS: Yeah. So are there any other genres you like to play sometimes or is it pretty much just K-pop?

JS: Right, right, so I do promote the newest and the hottest K-pop songs, but from time to time I would even do throwbacks. So let’s go back into the nineties and see what K-pop sounded like back then. Or some indie bands that are coming out from Korea, so some acoustic guitar, singer-songwriter type music that I would play sometimes. Sometimes even some really old-style Trot, I don’t know if you know that genre, I would play those. So an eclectic mix.

CS: Alright, cool. Yeah I mean I think at KCR you’ve got the market cornered so you can do whatever you want if it’s from Korea. So you kind of already answered this question because it’s part of your heritage but I just wonder if you want to go a little bit deeper into that so why is this music important to you?

JS: K-pop is important to me because I was born in Korea, I lived there for a few years before moving to California. It brings me back to my roots just to keep up with the music. I think if I weren’t doing this show I myself wouldn’t be listening to a lot of K-pop actually. I wouldn’t take the time to go into it I guess it’s by an artist that I really really like. I do it for myself I guess, for my own good, for me to keep up with it. And I like spreading multicultural, international music through this great station on campus. So I might as well use this opportunity to promote diversity and bring in different flavors to KCR and SDSU.

CS: That’s awesome. I know what you mean, definitely having a sports show is what keeps me up to date with sports when otherwise I’d be way too busy to follow it. And I mean sports isn’t as important as your cultural heritage because that seems really important to you so that’s great. Alright so hit me with some artists or an album or a song, what’s the hottest in K-pop right now? I’ll put a link up or two to the blog.

JS: Alright, there are a lot of girl bands, I would rather say groups because it’s not really a band, they don’t play instruments. They just sing, look pretty, and dance well (laughs).

JS: Yeah. So I can name a few girl groups because there have been a lot of them that have been doing really well and a lot of new groups. A few of my friends made song requests today so one of them I’m going to play today is by a group called AOA and also Girl’s Day, so those two groups I can mention. For some boy bands: Super Junior is a group name that I play often on the station, they have about TEN members in the group, so it’s a big group, and they are very famous, especially in Europe. Yeah so those are a few names.

CS: Alright cool. Well I’ll link those up to the blog. So I always like to finish with this question, how would a perfect show go for you? An ideal show.

JS: Ah a perfect show. I would say I would play, like I say I do, the show is about playing latest and the hottest Korean music. So playing a few of those, and being able to play really the latest, so I have the latest scoop and update for the listeners. And then having a few of the oldies, playing a few independent label songs and also maybe having a guest. A friend or another fellow Aztec who likes K-pop, and I would invite him or her share a few of their favorites of K-pop and maybe talk a little bit about why they like it. And of course if I get a ton of requests which means I have a ton of listeners right? So I guess that would be an ideal one hour.

CS: Alright cool. Well thanks for sitting down with me, it’s been a great interview.

JS: Yeah thank you, this was great because it also makes me think back to why do I want to do this and what do I learn from it, so great questions.

I’m not sure I’ve ever been complimented on my questioning ability so that was nice. I still need to work on my transition game, but practice makes perfect. Jini and I sat and talked until her show went to air. We were actually joined in the studio by Joey Bautista, KCR’s secret sessions man, who was also half of my first interview. Once Jini got to work on her show I left so she could do her thing. I really enjoyed interviewing Jini, she was my first DJ I’ve sat down with who plays music that isn’t native to the United States culturally. I perhaps didn’t articulate it well during my responses but I think that it’s fantastic that she is spreading the culture she loves to SDSU while at the same time helping to preserve it for herself. Dedicated DJ’s like her are what keep KCR going strong. Be sure to check out her Wednesday show next week, it’s the last week of broadcasting for the semester!