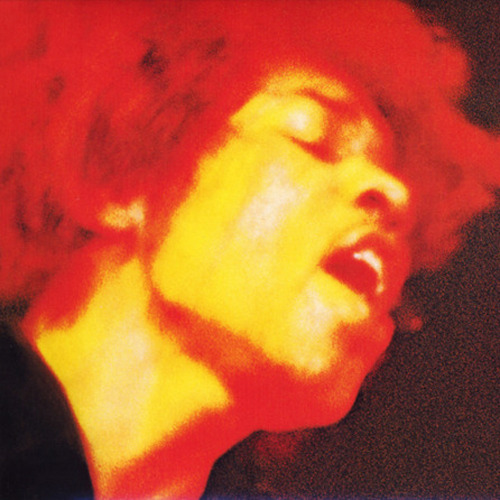 It’s Spring Break here at SDSU but the music never rests! It’s the end of the month so that means that I will be profiling another double album! Last month it was London Calling by The Clash, this time the album will be the legendary Electric Ladyland by The Jimi Hendrix Experience. The last studio album released by the Hendrix Experience before they disbanded, Electric Ladyland is considered to be the pinnacle of psychedelic rock. Mostly recorded in mid-1968, it shows Hendrix’s major evolutionary leap from his previous two albums Are You Experienced? and Axis: Bold as Love. Ladyland allowed Hendrix to finally indulge his multi-tracking prowess to give his guitar even more range and meaning. So let’s sit back and hear the greatest guitarist of all time in his finest hour as we listen to his crowning achievement.

The album begins with the swirling and pounding mixing effects of …And the Gods Made Love, a sort of short introductory track similar to EXP on Axis. There is a throbbing and swirling mass of sound that leads us into the first proper song on the album.

The song in questions is Have You Ever Been (To Electric Ladyland). Named after the famous recording studio that gave the album its name. Electric Ladyland serves the same purpose as say Sgt. Pepper’s Lonely Hearts Club Band plays on its own album: introducing the material. It ends with Hendrix calling on for his listeners to hear his record, saying “I want to show you.”

The next track is the hit Crosstown Traffic. A speedy and slick little rocker, Crosstown Traffic was one of the few tracks that utilized the Hendrix Experience’s full power trio line up of Hendrix on guitar and vocals, Noel Redding on bass and backing vocals, and Mitch Mitchell on drums. Many of the songs on the album do not feature Redding’s bass play, as he and Hendrix’s working relationship had deteriorated considerably at that point and Jimi recorded much of the bass guitar on the album by himself.

The whole rest of the first side is dedicated solely to the mammoth Voodoo Chile, Hendrix’s epic 15 minute electric blues jam session. It features Jimi’s spacey and imaginative lyrics and an ensemble band that included Jack Casady of Jefferson Airplane on bass and Steve Winwood of Traffic on the organ. The song is the epitome of Hendrix’s legendary ‘electric church’ mix of harsh rock and roll and murky blues music. Unlike many songs on the album, Voodoo Chile has no guitar overdubs due to it being recorded only in three takes with the final take becoming the master version. Hendrix’s guitar play is some of the most versatile of his storied career and one of the prime pieces of evidence that solidifies his place as the best and most influential guitarist of all time. Jimi Hendrix bends, shreds, hammer’s on, unisons, and mirrors his vocals, he did it all on this record. Mitch Mitchell also gives one of his finest drumming performances on this song as he is given ample time to flash his jazzy style of percussion up and down the track. The song contains crowd noise recordings that react to the song, expanding on the live feel of the song, as it was recorded basically once, the ultimate studio jam.

Perhaps the most conventional of all four sides of the double album, the second side begins with Noel Redding’s Little Miss Strange. Redding’s imaginative little piece of psychedelic pop both fits in and stands out in relation to Hendrix’s heavier more rock oriented and bluesy psychedelic music. Redding also got to contribute some acoustic guitar to the song, one of the few times where he could play the instrument of his choice on a Hendrix Experience record.

Up next is Long Hot Summer Night, another Jimi Hendrix piece that shows the changing sound of his music as he recorded the album. It has a lush mix and a choir like backing vocal track.

The third track is a masterful cover of Earl King’s Come On (Let the Good Times Roll), and old R&B song breathed new and vital life by the Jimi Hendrix Experience. The song hums along at a quick pace and just as the title indicates, this song is all about feeling good. Jimi gives himself lots of space to solo in this otherwise tight rocker and it’s a treat to listen to.

The fourth song on the flip side is Gypsy Eyes. The song is a half rock and roll track and half psychedelic blues track allegedly based on a field holler. It is one of the more straightforward songs on the album in terms of lyrics, a love song given a makeover in Hendrix’s own colorful style.

The final track on the first album is Burning of the Midnight Lamp. It was recorded over a year before Electric Ladyland, in fact it predates the second Jimi Hendrix Experience album Axis: Bold as Love. It was released as a single between their first and second albums. Burning of the Midnight Lamp is a superb power pop/rock song with a huge blues and psychedelic bombast that pulls the song forward as it rises and crashes. The song is very introspective and deals with feelings of loneliness that Hendrix would revisit often in his later work. The song was Jimi’s first use of the wah-wah pedal, which he would use often from then on. It is also the last song on the album to feature Noel Redding on bass until the very last track.

We are onto the first side of the second album hooray! The first track is the very bluesy Rainy Day, Dream Away. One of Hendrix’s a day in the life scenes, the song follows two friends passing the time indoors as it rains outside. Like many songs, on the second album, it is related to another track on the album. As the song ends, Hendrix plays a guitar lick that appears later on.

However before that can be explored comes the majesty of 1983…(A Merman I Should Turn Out to Be). At 13 and a half minutes it is the second longest song Hendrix recorded after Voodoo Chile, 1983 is the peak of his psychedelic recording career. The song circulates around a haunting chord progression and reappears at different parts of the song. The track is an apocalyptic vision of a catastrophe befalling humankind. Unlike Voodoo Chile, the song contains a large number of guitar overdubs to achieve its epic scale. The song abruptly shifts gears around four and a half minutes in and morphs into a very calm and relaxing section. Mitchell improvises some very creative and interesting cymbal work as the piece moves along, underpinning Jimi’s relaxed soloing. Hendrix also plays bass on the song and for what it’s worth gives one of his best bass performances. Chris Wood of the band Traffic contributes flute to 1983, in a very interesting and (again) psychedelic touch. The song gradually picks up in intensity, despite a few false starts, into a rollicking rocker for a short time before reprising the original vocal and guitar structure. The end of the world as we know it journey leads us to Atlantis, to meet the citizens of a formerly prosperous culture before they too met their end. Instead of a morbid end, the people became mermaids and mermen and invite Hendrix to join their society to live amongst them.

The coda to 1983 is a short little track called Moon, Turn the Tides…Gently, Gently that serves to end the fantastical voyage.

The last side of the album begins with the guitar riff that played towards of the end of Rainy Day, Dream Away. It begins Still Raining, Still Dreaming that serves as a sort of second half to the same some on side C. What is interesting for these two songs is that the drums were provided by Buddy Miles, who would serve as the drummer for Hendrix’s next venture after The Jimi Hendrix Experience the Band of Gypsys. The song is a short little jam with sparse vocals.

The next track is the rocking and rolling House Burning Down. Another snap of life portrait, this time of a psychedelic vision of an arson committed. The lyrics narrate with competing past and future imagery, giving the song Hendrix’s trademark stamp of out of this world poetry.

The penultimate song on the album has become a classic in Jimi Hendrix lore, his cover of Bob Dylan’s All Along the Watchtower. This track is one of Jimi’s defining works, a simple cover that bloomed into a huge multi-overdubbed behemoth that consisted of many layered acoustic, electric, and bass guitars all played by Jimi himself. Its guitar is considered one of if not the best of his career. Bob Dylan said that he plays the song Jimi’s way ever since he heard the cover.

The final song on the album is the thrashing and blasting Voodoo Child (Slight Return). As the title suggests, it is return to the themes of Voodoo Chile, the piece was conceived as the full trio was playing Voodoo Chile for the press. A much rawer and more immediate record, it compresses the 15 minutes of Voodoo Chile into a furious five minute song that was one of the heaviest and most furious ever written at the time. From the beginning, the song erupts with explosive fury and could be considered Jimi Hendrix’s, the most legendary guitar play of all time, defining piece of guitar work. He flashes all of his varied and dynamic skills, a whirlwind of talent and skill that rock music has never seen the likes of again since he left us. The last minute and a half he solos with unbridled passion and fury, his guitar howls and snarls as if he was exorcizing it. In a fiery rush of creative energy, Voodoo Child abruptly fades out, closing the album.

Electric Ladyland is a testament of the creative skill of Jimi Hendrix, it’s his baby and has grown into the definitive album of both his career and of psychedelic rock of the late 1960’s in general. It was his last full studio effort in general as well. He recorded the live album Band of Gypsys in 1969 and was working hard on his follow up album First Rays of the New Rising Sun when he died in England in 1970. Jimi Hendrix was an unparalleled guitarist and a genius writer of music. With just three studio albums and his live Band of Gypsys record, he revolutionized popular music and any kind of music related to the guitar.