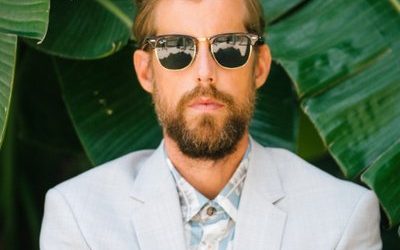 KCR’s Jacob Stephens had the opportunity to talk with Andrew Ross McMahon from Andrew McMahon in the Wilderness.

Read on to see what Andrew McMahon said, especially regarding some of his biggest influences, favorite moments touring, and to gain further insight into one of his songs!

Jacob Stephens: How did you get into music and singing?

Andrew McMahon: I was 9 years old when I started playing piano, and singing, and writing music. I was making songs and finding ways to record them. Eventually, in high school, I started my first couple of bands and started to play shows around the town that I grew up in. And yeah, I was really fortunate. Within a year after graduating high school, I had built up a really good following with my first band, and then we got signed and the rest is history from there. Honestly, I never really looked back and just kept making music.

AM: Yeah. Truthfully, it’s the only thing in my life which has consistently motivated and inspired me. And from a spiritual standpoint, it drives me.

JS: You recorded one of my favorite songs “High Dive” so I’m just wondering, what went into that song? Was it a flashback into your childhood or was it something entirely different?

AM: It’s funny, I wrote that song with a good friend of mine that co-produced the first wilderness record, Mike Viola. Mike is a beautiful singer/songwriter in his own right, and we had written a handful of tunes together at that point. I remember what motivated the writing was when I was on the way to the studio; I had heard “The Boys of Summer” by Don Henley. In my opinion, it’s one of the most well written, well recorded songs of all time, and I remember going to the studio and just thinking “We really need to dissect “The Boys of Summer!” I want to understand the anatomy of that song and really understand why it’s so great and what makes it so special.”

There was a mandate when I sat down during that session to try and figure out what the DNA of a good track had, which is something I don’t usually do, but I just felt inspired to do that time – almost as though it were a little writing assignment. After we listened to “Boys of Summer” a bunch, the thing that struck me about that song was how vivid the imagery is and how personal it seems, but somehow that specificity still drives it to feel nostalgic. For me, I approached the lyrics as a kind of sliding door situation. I looked at a handful of scenarios and choices in my life that lead me to my wife, the enduring love of my life. I looked at a couple of those moments and thought “What if instead of going right in this moment in life, I went left? What if my wife and I didn’t get back together after that time we were broken up?” That’s what drove the inspiration of this song. This concept of what could have been, or maybe even should have been. A moment in life you “missed the boat on,” and how that would feel and what that would look like. For me, it was this guy just passing the house of his old girlfriend and catching a glimpse of her in the window, listening to the music of some other person that no longer was me. That was the head space I put myself in for that song.

JS: That’s very insightful! So what has been your craziest moment on tour so far?

AM: Oh my gosh. I had one show in the Something Corporate days that the police tried to shut dow. We refused to leave the stage and almost got arrested but we have had a couple of those moments. Also, in the last several years I’ve enjoyed crowd surfing through the audience on various different inflatable pool toys and things like that. There have been a couple of fun rides that have taken me farther into the crowd than I anticipated. But I think some of those early shows when we were playing with a lot of punk bands and the antics that go along with that were always pretty interesting. Like jumping off of ten-foot-high speaker stacks, and things like that.

JS: Do you look up to someone? Or is there someone you aspire to be?

AM: Ummm… I mean look if there is an artist whose career I have admired in a profound way, it would be Tom Petty. He always managed to write great music no matter what era or genre was popular or trending at the time. And he seemed to approach it with an ethic and appreciation and respect for his fans. I think that is something I have always been really moved by. But on the other side of that coin people like Trent Reznor and Randy Newman have managed to not just have their artist careers and records and what they do on stage, but also gone on to compose and write for other projects. I find myself looking towards them as these artists that have diversified their careers, and create not just for themselves, but for other artists’ projects as well.

JS: Do you feel like you’re a role model now that you have made a name for yourself in the music world?

AM: I don’t know if I feel like I’m a role model. I think that in my career, there’s a lot of things I am proud of. I’ve been able to launch a lot of other projects and start a foundation and charity that does legitimately very good work for a lot of people who need it. I’m proud of these things and I hope that if someone is going to model their life or career after the things that I have done, then I would point to those as being the things I’m the most proud of. But, I would not say I go out of my way or try and put a tremendous effort into trying to portray myself as a role model. I’m certainly as flawed – if not more flawed than most human beings. I think there is a danger to putting anyone on a pedestal because then you’re bound to be disappointed.

JS: Speaking of your foundation, you founded the Dear Jack Foundation, which is a cancer foundation. How can people get more involved and help with that?

AM: There are a lot of ways. If you got to DearJackFoundation.org, you can learn about the mission, which is to try and support survivors and patients who are diagnosed with cancer from ages 15-39. This is a very under researched, and underfunded demographic of cancer patients that I’d say more so than any other demographic is in serious need of attention and help. The best way to get involved is to send a donation or to sign up for the bone marrow registry. I’m alive because my sister was a match for my bone marrow. A lot of people do not have those matches and I’m trying very hard to make sure people are aware of what the bone marrow registry is and to get people on the list. Also, if you look online there is a program called the Life List which is a program where cancer patients make a list of things they want to accomplish or obtain during their cancer treatment, and you can see the list of the patients and help fulfill the wishes of the “Life List Warriors” as we call them.

JS: Awesome, I’ll have to do that! How does it feel being able to perform and write your own songs?

AM: Because songwriting has been such a fundamental part of my existence, and since I get to answer questions for myself while communicating to people – and the fact that I get to do that professionally is pretty remarkable and I’m very grateful for it. I think though, and this applies to anything that is a job, to some extent that some days I feel like “man I don’t want to write today” for whatever reason, but the overarching feeling attached to the fact that I’m able to write and perform music for a living is one of deep gratitude. However, getting to play concerts for the last 18 or 19 years is the best part, because truthfully, as much as I love writing music, I love to perform. I love being in front of a crowd and I love the energy that you get to be a part of when you can put on a show. It’s a real gift to get to do what I love.

JS: What part of your life has inspired you most within your music career?

AM: For me, the greatest inspirations tend to be my personal relationships. My interactions with the people that are close to me and the world as a whole are what drives a lot of my song writing. My songs are very story based, and to be able to tell a good story you have to live a good story. I try to stay inspired by keeping myself spiritually fed by being around people I care about, and traveling to places that excite me and keep me from stagnating and doing the same thing over and over again. Listening to great music and reading great books and consuming art and culture is another way for me to stay inspired.

JS: How did you end up meeting the openers for your tour [Grizfolk & Flor]?

AM: The Grizfolk guys have done shows with me in the past and I have always been friendly with them and I love their tunes. As for the Flor guys: we did a thing when we were looking for openers where you reach out to other agents and they forward you music from clients that are interested in the gig. With Flor, truthfully, I just fell in love with an EP they put out that they sent in as part of a submission list for our tour and I was like “Tell me about these guys!” When I have the ability to pick up opening acts, you want to bring people that move you and are excited about their music. Oftentimes, I just need to look at the fanbase I have built that has been so passionate and supportive of me that I take it really seriously to try and provide them with a new artist who they can be as excited about as they were when they started listening to my music. So, such was the case with Grizfolk and Flor, that they were interested in the tour and I loved both their bands and their music. They have really proven to be amazing support acts and super talented.