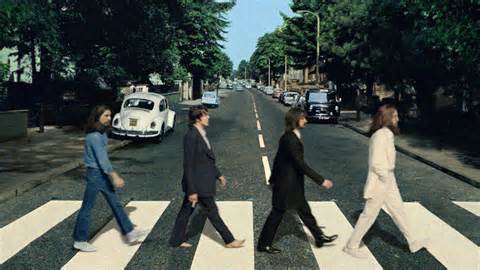 Alright, this is a big one. It’s the legendary Abbey Road by The Beatles. I have not talked about an album of nearly the same stature before so I’ll try my best to do this record justice. On this blog I’ve attempted to look at albums that are sometimes overlooked nowadays either because the artist has more famous works that overshadow a certain album or because the artist just isn’t as popular anymore. This album is different, at least I hope. If you haven’t listened to ABBEY ROAD by THE BEATLES you should really do that and I’ll tell you why. It’s one of the most iconic albums in history written by the most influential band of all time. If you somehow still aren’t convinced, keep reading and I can go into a bit more detail for you.

For those of you who are unaware, Abbey Road was written at the very end of The Beatles’ career. The disastrous Get Back sessions (that produced no album) nearly broke up the band right then and there at the beginning of 1969. When another album was planned The Beatles made sure to do it right and not repeat the same experience. What came out of this was some of the best music that The Beatles ever wrote in their long and storied career. Not that it was all sunshine and happiness, the band was irreversibly fractured and according to interviews there was a feeling that this would be their last record. The album is one of the best sounding from the whole 1960’s decade, and at this point music began to sound modern in the sense that if recorded right it could hold up with music released today. Abbey Road could have been made yesterday and nobody would know otherwise. I can maybe think of one or two albums recorded before Abbey Road that has a better sounding mix. The band that pioneered modern recording techniques, taking pop music out of the stone ages, had gone full circle and guided guided the industry to its current state. Abbey Road is the real last record of The Beatles and a fitting end to their careers.

The album starts off with John Lennon’s well known composition Come Together. The song features somewhat cryptic lyrics of a character that many fans have assumed refers to each of the members of the band. Paul McCartney’s bass line is one of his best, a smooth and groovy riff that is one of the defining features of the song. Come Together half of the single released to promote the album.

Up next is George Harrison’s Something. It was the other half of the double-sided single released for the album alongside Come Together. Something is one of Harrison’s most famous compositions and was a sign that he had matured into a songwriter on par with his band mates John Lennon and Paul McCartney. Frank Sinatra once called it the best love song he ever head, it’s hard to garner higher praise.

The third song is Paul’s first piece for the album. Maxwell’s Silver Hammer pales in comparison to the dual team of Come Together and Something but it’s charmingly quirky in its own regard. The song is about a serial killer named Maxwell Addison who murders innocent people with his hammer. Interestingly, the song is one of the few on the album that includes a Moog synthesizer, one of its first uses in recorded music. Anybody who says The Beatles weren’t original don’t know what they are talking about.

If Maxwell’s Silver Hammer was Paul’s pop song on the first side then Oh! Darling is his big rocker. It’s in the style of songs that The Beatles would write or cover early in their careers. It is one of McCartney’s most scorching vocal performances and it required him to come to the studio early in the morning to stretch his voice beforehand so he could sing it right.

The fifth track on the album is Octopus’ Garden, Ringo Starr’s second and last composition for The Beatles. One of the happiest and most relaxing songs on the album, it was written to identify with Ringo’s image as singing songs for children, like he did with Yellow Submarine and Good Night. Even with the tense circumstances that the album was recorded under, everybody pitched in to help Ringo with his little masterpiece.

The last song on the first side of the album is Lennon’s I Want You (She’s So Heavy). The song is simple in composition and lyrics. The song alternates between two progressions, the ‘I Want You’ part is a bluesy call from John to Yoko Ono, who he wrote the song for. The ‘She’s So Heavy’ sections revolve around an interlocking guitar groove from both George and John. Ringo’s jazzy drumming complements the song nicely while Paul’s bass playing is some of his most technically proficient in his career. Billy Preston plays organ on the song, reprising his role from the Get Back sessions. After the third go around of the ‘I Want You section, the ‘She’s So Heavy’ guitar groove hits like a torrent. A slowly plodding groove that builds and builds with windy and white noise sound effects swirling on and on in goose bump raising fashion until the song abruptly cuts to end the first side.

The second side of Abbey Road starts off with George Harrison’s beautiful Here Comes The Sun. One of the other tracks that also features the Moog synthesizer, the song can’t help but make you feel happy. It is one Harrison’s songs that doesn’t feature John Lennon, an unfortunate trait that carried back several albums. It is one of the ultimate feel good songs and it makes you wish it would go on for the rest of your day.

From the cheer and sunshine that is Here Comes The Sun we go to the gloomy and mysterious Because. John Lennon was inspired to write it when Yoko Ono was playing Beethoven’s Moonlight Sonata, Because uses the same chords but in reverse. The song is a three part harmony between Lennon, McCartney, and Harrison. The Beatles were put on the map because of their songwriting acumen and uncanny ability to harmonize their vocals and Because could very well be their best harmony.

The rest of the album comprises the so called Abbey Road medley. Comprised of short songs strung together from the White Album and Get Back sessions, the medley was a product of Paul’s and producer George Martin, Lennon was characteristically unamused, but a few of his contributions made their way into the medley.

The medley begins with You Never Give Me Your Money, a Paul song consisting of a few segmented musical ideas. The song features Harrison and Lennon trading guitar arpeggios and solos as the song fades out and is terrifically catchy.

Sun King slowly fades in and is one of John’s songs in the medley. Like Because, it also showcases harmonies between himself, Paul, and George. There is a word salad section where the Beatles all sing foreign language words and slang terms in a somewhat rhyming manner.

Segueing from Sun King is Lennon’s Mean Mr. Mustard, a short piece written while on The Beatles trip to India. The song cuts to Lennon’s third song on the medley Polythene Pam, which is a bit more of a rocking song than the previous two. Polythene Pam moves into the last song in this section of the medley She Came In Through The Bathroom Window was a Paul contribution, written with the inspiration of a particular Beatle fan desperate to see him via the exact method described in the title.

The last three songs are also Paul tunes, the first being Golden Slumbers which moves directly into Carry That Weight. Both songs share a similar composition, Carry That Weight even echoes portions of You Never Give Me Your Money, tying together the medley idea even more. To close out the album is appropriately titled The End. A seminal Beatles track, it is the only song to feature a solo by all members of the band, including Ringo’s only drum solo ever. Paul had all three of the other Beatles play short guitar solos, alternating between each other every few bars. The song ends with a final couplet that states, “And in the end, the love you take/ is equal to the love you make.” A perfect summation of the positivity that the band created in their short eight years of recording music.

It wasn’t quite The End, hidden about 20 seconds after the song is over is a short 23 second track entitled Her Majesty. A little Paul bit accompanied by an acoustic guitar. It was supposed to be placed in between Mean Mr. Mustard and Polythene Pam but was cut out of the reel, a sound engineer told not to throw anything out and not knowing what to do with it stuck it on the end. The Beatles liked the little surprise track and left it on.

Just as The End wasn’t the real end for Abbey Road, the album wasn’t actually the last released while The Beatles still existed as an entity. Months after John Lennon had already left, the Get Back session material was mixed under the supervision of Phil Spector and released in 1970 as Let It Be, which is considered the last Beatles album even though it was recorded before Abbey Road.

It’s hard to state the significance of this album. Just the fact that the cover art has been imitated so many times is a testament to how important it is to the history of recorded music. This is the crossroads between art and how it influences people. What is the meaning behind a 47 minute long collection of pop songs? How does music as an art form matter? I’m not sure I can answer those questions. I will say that albums like Abbey Road have moved millions of people into thinking and feeling in a different way. Maybe that’s the significance of art, connecting humanity to experience thoughts and emotions outside of their previous experience.