San Diego State’s lacrosse team played their first home game of the 2020 campaign on Thursday afternoon against Arizona State University. The Aztecs won a thrilling back and forth game 19-18.

Freshman Camdyn O’Donnell tied the game at 18 for the Aztecs, then with less than a minute remaining, she scored the game-winning goal. O’Donnell finished with four goals and three assists on Thursday.

“We were going back and forth,” O’Donnell said. “My teammates had trust in me and that put confidence in myself.”

“I think we played it close in the first half to our gameplan.” Head coach Kylee White said. “We really were missing some key things and that’s what we re-visited at halftime.”

Out of the halftime break, the Aztecs scored four unanswered goals and led 12-10. However, the Sun Devils would not go down quietly.

Led by red-shirt senior Kerri Clayton, ASU retook a 14-12 lead. Then led 18-16 with only two minutes left in the game. Clayton finished with six goals and three assists.

“We wanted to push her [Clayton] under instead of letting her get open and take the shot she was scoring on.” White said, “We wanted to make them pass a little more. We needed to help a lot more.”

The Aztecs responded yet again, scoring three unanswered goals to finish off their home-opener. Senior Emily Resnick scored the teams 17th goal and O’Donnell finished the off the job.

“They gutted it out.” White said, “Home-opener is great, but that’s not what i’m thinking about. To win a back and forth battle and where it comes down to the end and they gutted it out, that’s the most exciting part of it.”

SDSU Junior Lexi Tan scored six goals on six shots and opened up the field for her teammates.

“It was all my teammates, they were passing to me.” Tan said, “I just looked and it was wideopen.”

The Aztecs will have a difficult schedule, likely facing five nationally ranked teams during the 2020 campaign.

SDSU lacrosse now sits at 1-1, with their one loss coming against Stanford University.

“The team that showed up today has to be the same on Sunday.” White said. “Just because USC is ranked shouldn’t change the way we play. We need to go in there feeling that way instead of the way we started against Stanford.” 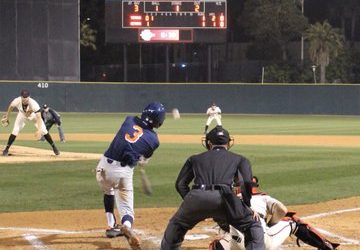 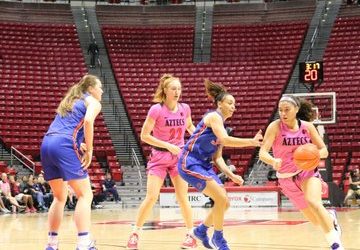 In San Diego State’s softball home-opener, the Aztecs were defeated 3-0 by BYU at the SDSU softball field on Thursday night despite a strong pitching performance.

Tonight also marked the beginning of the Campbell/Cartier Classic, an annual event held in the memory of former Aztec softball players Susanne Campbell and Karin Cartier.

It was a scoreless game with strong pitching on both sides, with the first score and hit coming at the top of the fifth inning.

The Cougars’ catcher, Ry Jense-McFarland, singled to left field, which brought home Kaylee Erickson and gave BYU the lead. In the top of the seventh inning, Jensen-McFarland shot a solo homerun to deep right.

Later in the inning, Arissa Paulsen who plays first base and pitches for BYU, singled into left and brought in Taylei Williams.

Balint pitched into the seventh inning and tonight marked her first home game as an Aztec, as she transferred from Oregon.

“At Oregon I wasn’t a starter. I wasn’t a captain and I didn’t have the responsibilities. I kind of just showed up and left. I have to be accountable for my other players.”

She tallied nine strikeouts and threw 145 pitches before being relieved by freshman Karina Faasisila.

Balint calls her own pitches, which helps her game because she enjoys fast-paced outings.

“Me and the catcher [Alizae Umi, SDSU’s catcher] we’re both on the same page.” Balint said, “I work at a very fast paced, I’m like a machine I’m constantly going, going, going and I don’t like to be stopped.”

The Oregon-transfer and Van Wyk made it clear, Balint throws what she wants when she wants.

“[Balint] knows what she wants to throw in there.” Van Wyk said, “I don’t have to call pitches. She’s very strong minded, she’s got a great level of confidence.”

Balint credited her back injury for her drive and confidence on the mound.

“I am so driven and motivated since my back injury.” She said, “I could not throw the ball past 60, but mentally I was so sharp and I could just not physically do it. It made me so frustrated because mentally I was ready to go.”

SDSU will have to move on from this one, as they have two straight double-headers coming up.

On Friday, the Aztecs play against Southern Utah and Cal State Fullerton.

When Saturday rolls around, SDSU will play BYU and Southern Utah again.

The four games will all be played at the SDSU softball field.

Van Wyk’s message to her team after the loss: forget this one and move on.

“We got two double-headers coming up.” she said, “We’re going to play BYU again later this weekend. We have to do a better job adjusting at the plate, we were swinging at bad pitches.”

Umi said the team’s preparation from the off-season will help them survive the back to back double-headers.

“We put in a lot of work in the fall, so we’re just depending on that.” she said, “That’s really going to help us in the double-header tomorrow.”